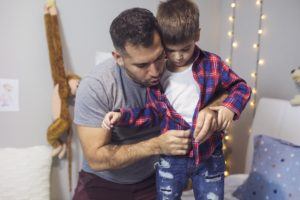 The standard deduction remains an option for all parents — regardless of the number of children they have — if they do not wish to itemize deductions. Therefore, those parents who do itemize their taxes will not be able to claim the enhanced deduction.

What to know about the changes

One important item to note about this change is that the child dependency exemption was not fully repealed — it was merely reduced to $0 temporarily through 2025. After that, the dependency exemption will return. This allowed Congress to avoid modifying other parts of the tax code that refer back to the exemption.

This means that any other provision in the tax code requiring the taxpayer to qualify for the dependency exemption will still bear such a requirement, even though the exemption technically offers no benefit to the filer.

The rule will be implemented for tax year 2018. When it comes to tax year 2017, the dependency exemptions are still $4,050 per child on parents’ income tax returns.

If you have any questions about how these changes to tax law will affect your tax filing in the future, contact an experienced Bucks County divorce attorney at The Law Offices of Jennifer Courtney & Associates, P.C.